Cars To Call For Help After Crashes

EU Plans For Cars To Call For Help After Crashes

By 2015, the European Parliament wants all new cars to automatically alert emergency services in case of a crash, a service known as eCall. The Parliament adopted a resolution to this effect in a show of hands on Tuesday, and urged the European Commission to make eCall law.

The introduction of eCall, technologydesigned to automatically call the European emergency number 112 when a car crashes, would enable rescue services to arrive faster, saving up to 2,500 lives a year and reducing the severity of injuries by 10 to 15 percent, according to the European Parliament. 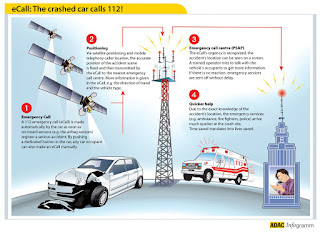 The eCall system is triggered by sensors in the vehicle like those which cause protective airbags to explode in a crash. Once triggered, the device automatically contacts the nearest emergency service centre, via the 112 service. It transmits the exact location of the vehicle and other data, such as the make of the car, and establishes a voice connection with the emergency services operator.

The eCall systems will also use satellites and mobile telephony caller location to determine the location of the crashed car. Based on the location, eCall will contact the nearest emergency center, and will also send a minimum set of data (MSD) that includes time, the direction in which the vehicle was travelling, vehicle identification, an indication if eCall was automatically or manually triggered and information about a possible service provider. Sending the extra data is likely to reduce misunderstanding and stress and helps to eliminate language barriers between the vehicle occupants and the operator, said the parliament.

The system must not be used to monitor a person’s movements or determine his or her location unless that person has been involved in an accident, the parliament said.
The full deployment of eCall requires cooperation between public authorities, car companies and mobile phone operators. If eCall becomes mandatory the car manufacturers will have to build it into every new car, and member states will have to upgrade their emergency call systems to comply with the eCall standards. Not all the member states have agreed to use the system and those who did are still in the process of implementing it.