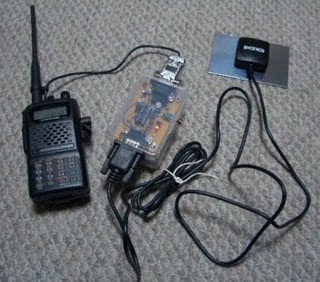 The Automatic Packet Reporting System (APRS) software has evolved over many years of WB4APR involvement in amateur packet radio. In 1976 WB4APR had built the first digital RTTY on the air automatic message system which evolved into a dual port phone and packet radio BBS for the AMRAD group when ASCII first became legal in the late 70s [1]. In 1978 they began experimenting with the original VADCG packet boards from Canada. For years he was on the AMRAD board of directors, the Amateur Radio Reasearch and Development group that was instrumental in the original specification for AX.25 written by Terry Fox, WB4JFI and published by AMRAD in 1984.

Isolated overseas in Japan in 1982, he wrote his first data maping program, which took NAVY HF position reports off the air and displayed them on an APPLE-II. From the beginning, he was always making packet maps of the growing packet network [3,5,6]. In 1983, he wrote a gateway/BBS program on his Commodore VIC-20 computer to permit simultaneous operation of both HF and VHF ports for exchange of packet messages and pioneered the use of 200 Hz shift for packet on HF with cross-county links to W0RPK, W9TD, and K7PYK [2]. They used 10.149 MHz. To his knowledge, this was the first amateur HF BBS/GATEWAY; and it remained on the air 'round the clock for 5 years through 1989 under the FCC STA for automatic packet HF operations.

WB4APR (Bob Buruninga) APRS connectionless protocol idea was first used in a VIC-20 program in 1984 for reporting the position and status of horses in a 100 mile cross country endurence run for AMRAD [4]. He spent two years improving the idea for amateur packet radio support of the National Disaster Medical System exercises sponsored by FEMA [7,8,9]. During this time frame he called it the Connectionless Emergency Traffic System (CETS). At the end of the second national exercise, he dropped the C-64 and began to port CETS to the new IBM PC. He also began to integrate packet mapping into the program.

During 1990 he got tired of trying to find a public domain set of maps and began to digitize the East Coast himself with a TEXT format so that any HAM could draw a map for any local packet application using only a text editor. Once that maping decision was made, APRS evolved nightly as he began to play with it on the air, and realized its potential. For four years now, APRS has consumed thousands of hours of evenings and weekends as he tweaked the program and drew maps.

Finally, he is not doing this to make money on amateur radio. The registration contribution helps defray the mailing hassles and the psychological burden of having hundreds of HAMS all across the country call him, at home at all times of the evening with repititious and continuous questions. He learned this lesson the hard way by releasing his C-64 BBS source code to the HAM community in 1984 for free.

Many hams doesn’t know this history. Now, he still get phone calls, letters without SASE', and registered letters from third world countries (requiring a trip to the post office) asking questions about this obsolete software! 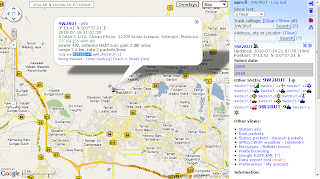 In Malaysia the first technical talk on APRS was oraganize by the Malaysian Amateur Radio Emergency Service Society (MARES) on the February 15  2009. Salleh (9W2STT) under Emergency Responce Team (ERT) give an idea to develope the Special Interest Group (SIG) to work on APRS from there we can see now many Malaysian station are on APRS..... many thanks to Bob WB4APR for his constribution on digital mode.....
Posted by FTDX400 at 10:28 PM